As, very disappointingly, we had only two entries to this challenge,  and it seems unfair to choose one above the other,  I have decided that there will not be a Top card or a prize given.  I would just like to give a massive thank you to both our entrants - Jo and Linby -  for their continued support.

We will now see you all again on the 11th of November for the new challenge.  Don’t forget to click here for the ideas and inspirations from the team on the current challenge and Mr Linky of course for your entries.

The CD Sunday Team has decided that starting next year (2019) we are going to change our prize giving policy. We will still be giving prizes but just three times a year.

The first special will be our Birthday special on the nearest CD Sunday to the 18th of April.

The second special will be an August holiday special - last CD Sunday in August.

The third special will be a Christmas special (nearest challenge Sunday to the Christmas break).

We will be choosing just one Top entry each month, but there will be no prize awarded except for the three special months as above. The Top entry will be announced with the next but one following challenge (as it used to be).

Carol and the CD Sunday team
Posted by Carol at 08:00

Welcome to our CD Sunday Plus Challenge Blog

We have just a few rules.

1. Our Challenges are fortnightly commencing on Sunday - and they close at 1 p.m. on the following second Saturday.

A Top 3 will be chosen for each challenge by the team member who hosted the challenge.

2. Please link your entry to your actual entry and not just to your Blog so that we can find it quickly and easily and there will be a limit of three entries per person per challenge. If you haven't got a Blog you may still enter by sending your entry via email using our address which is showing below these rules or on Facebook. Our Facebook link is posted on each challenge.

3.This is the CD Sunday Plus Challenge Blog. This means that as well as following the theme of the challenge, a CD, USB or Digital images, or any combination thereof, must have been used somewhere in the making of the card or project. It doesn’t have to be the whole card but it can be. It can be as small as perhaps a sentiment or a piece of backing paper- but there has to be some CD, USB or Digital source content somewhere together with everything else you have used. THE SOURCE MUST BE NAMED AND CREDITED.

5. Our email address is cdsunday2@gmail.com

Privacy Policy:
Those leaving a comment on any post on this blog do so in the knowledge that their name and blog link are visible to all who visit this blog and by providing their comment they have published their own personal details on this blog and also consented to our use of that personal information for that specific purpose. 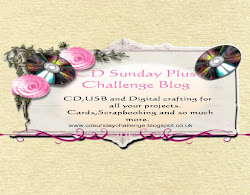 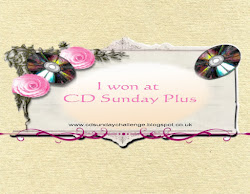 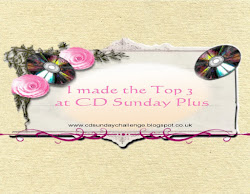